Back to News and Events

NIST Summit Takeaway 3 of 3 -- The Elephant in the MBE/MBD Room: Training

Our final takeaway is a theme that emerged early in the event: the training gap.

In the Q&A after one of the Day One presentations, an attendee asked “how are we going to be able to implement model-based enterprise when our people need to be re-skilled, new hires are lacking key skills and there aren’t nearly enough qualified people to do the teaching? 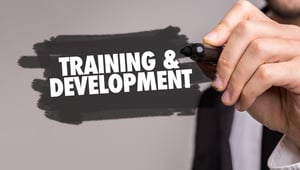 In the drawing-based workflows that have predominated for years, designers were not expected to devote much attention to inspection. That ch

anges in the model-based enterprise. Designers are involved with marking up GD&T on CAD.

Production resources are also getting more involved with inspection due to the effects of Moore’s Law. Compute power keeps doubling as costs hold steady or drop. It’s already had a huge effect on high-value, low-volume parts. In these use cases we’re now seeing 100% inspection of precision parts concurrent with production.

As the effects of Moore’s Law continue to re-shape what is economic and practical, this practice will become more widespread, and eventually spread to volume production.

Models are emerging from engineering with many more dimensions than are useful. Lacking the experience of what is needed, and the ability to quickly add dimensions, the natural tendency is to add more dimensions. After all, more must be better - right? In fact, the reverse is too often true.

It isn’t just GD&T skills that are at issue. In the model based enterprise models must be built with an eye to their (re)usability by downstream functions. What constitutes a “good” model changes when the model replaces the function of drawings. It changes even when companies switch to drawing analogs such as 3D PDFs and STEP.

This explains why retraining is a consistent message from the success stories around MBE and MBD.

Often the most experienced designers have enormous influence on how things are done. Their informal authority is a big part of many corporate cultures. When the new methods undercut that authority, the natural tendency is to resist the change. It’s critical to train these internal experts first. Then their position of authority is maintained and they champion the change.

In future, the skills of part and assembly inspection must become more widely distributed in the design and production functions. Based on an informal poll of people at the NIST Summit there is a significant gap in this area. In the US, there are over 400 schools that teach mechanical engineering… and less than five of those schools teach metrology.