Weldments present unique challenges. You have to integrate daughter parts from inside and outside your organization into a sub-assembly with multiple attachment points. If there are problems tracking down the source can be challenging, especially if the problems are intermittent. Is it a daughter part? Which one, or ones? Is it the gauge? Is it the assembly process – and which station?

Read how an OEM used LaunchRite to solve a vexing dashboard flush and gap problem where a complex weldment played a central role.

During assembly an automaker discovered that the glovebox and steering component mounting locations on a cross-car support member were out of alignment. Plus, there were unacceptable gaps in the airbag opening area. The best fix process was further confused because the gaps around the airbag opening sometimes appeared at the top, sometimes at the bottom. 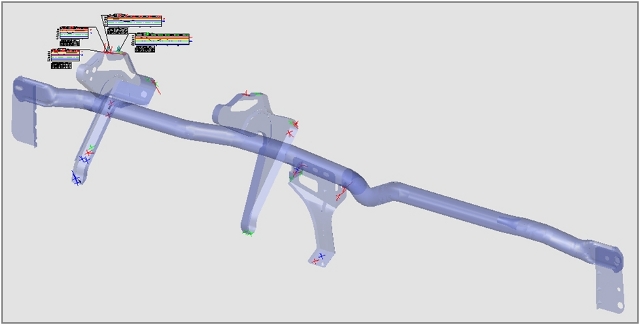 Origin proposed that the company use LaunchRite to determine the root cause and best fix. LaunchRite leverages a unique integration of statistical methods and best fit technology to enable engineers to determine the capability of each daughter part and the entire assembly. Plus, LaunchRite enables engineers to explore corrections at the feature, daughter part and assembly level – all via iterations in software. This dramatically increases the number and scope of iterations while simultaneous slashing iterations of the actual process. 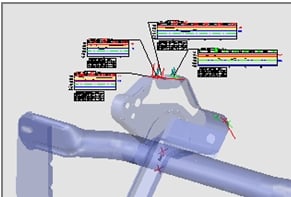 Using the measurements of the entire cross member and the fitting tools in LaunchRite the engineers were able to assess the capability of each daughter part versus CAD. The whisker data showed at a glance that each daughter part was within tolerance, confirming the supplier reports.

So the engineers quickly focused on the cross member itself. Analysis showed that the angle bracket at one end was welded on a skewed orientation. Plus, the locator holes on the bar were off by 3mm. These factors made it difficult for operators to located the cross member consistently on the assembly fixture.

Using LaunchRite the engineers simulated repositioning the mounting holes that would drive the entire assembly to nominal yet stay within the range of capability limits identified with LaunchRite. This avoided unproductive re-work of component parts. LaunchRite also generated supporting statistics and graphic reports needed to win buyoff for this solution. No re-measurement of parts was needed. Nor were any iterations of daughter parts or sub-assemblies.